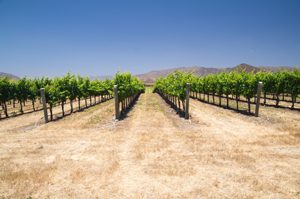 With a long-term drought plaguing much of California and Northern Nevada, the agriculture industry is adjusting and innovating.

“[The drought] is one of the worst we’ve had in history,” said UC Davis Professor and watershed expert Jay Lund. “In some ways, particularly up in the watersheds, because it’s been extra warm, it’s among the driest in history.”

Lund added, “Some would say even the driest we’ve seen in a thousand years.”

In 2015, snowpack was at record lows in the Sierra Nevada and other western mountain ranges. California’s San Joaquin Valley was probably hit worst by the drought. The area includes seven counties with a mostly rural makeup and uses the most agricultural water in the state. Smaller communities with limited infrastructure suffered most.

“The areas that tend to get hit the hardest are agricultural communities, particularly small ones, that might only have one shallow well,” Lund said. “So in addition to the agricultural losses, we had maybe a thousand, or several thousand, small household or small community water supplies that have gone dry during the drought.”

However, the drought has not yet put a dent in ag profits. California enjoyed record numbers, even as two-thirds of its usual water supply was gone in 2015. Much of that loss was made up through pumping ground water. But overdrafting can lower the water table, cause land subsidence and is unsustainable over the long term, according to a report from the Pacific Institute.

While profits have not yet been harmed, a variety of adjustments are occurring. California is shifting from annual crops to permanent crops, like almonds, which are more profitable and drought resistant. Water trading is on the rise. There has been a reduction in heavily irrigated crops like alfalfa and hay, while production of vegetables that sip water from underground irrigation lines continues with less restriction. There has been a sell off of cattle in both California and Nevada at good profits, but that has left concerns about the decimation of the herds. Nevada Department of Agriculture Director Jim Barbee said the number of cattle in Nevada fell from 400,000 to 300,000 in the last year.

Barbee is encouraged by a much wetter 2016 so far. “We’re pretty excited to see the amount of snowpack we’ve received,” he said. “We recognize that we have a few more winters of snowpack that we need into the future, but we’ve seen some good water this winter, and we’re hopeful that we’re on our way out of it.”

In Yerington, Nevada, Peri & Sons Farms owner David Peri remains cautious. “We are still keeping ourselves in a curtailment mode, because we’ve only had a decent winter this winter, but the previous four have been from bad to terrible,” he said. The family operation has a long history of farming in Northern Nevada, but has also expanded to California with farms in the central San Joaquin and Imperial Valleys. “We need three or four wet years to get back where we need to be.”

Smart water use is in vogue, and the ag industry is constantly working on ways to produce more food with less water. Barbee’s department works with the U.S. Department of Agriculture to help producers with conservation programs and provide grants or low interest loans to help them obtain more efficient water systems. “There are a lot of folks that are taking existing pivots and putting in better sprinkler technology where they’re using sprinklers that conserve more water, that actually put the water more on the exact spot where they need the irrigation system,” Barbee said. “Some of our smaller producers are using more labor intensive drip programs that are definitely conserving water.”

These days, Peri said most vegetable growers in the west use drip, where water is dispensed only in the root profile of the crop, so there is very little waste. “And all of our drip is under the ground, so we aren’t getting any evaporation out of it,” he added. “There is no more efficient way to irrigate.”

Peri is also trying a new polymer product that absorbs 500 times its weight in water on his alfalfa fields. The material is placed in the top inches of the soil. It traps any moisture and then gravity pulls it out of the material and into the plants. “It basically cut our irrigation in half, and we were able to make a crop,” Peri said.

While there is concern that droughts such as this will be more severe because of climate change, there is an understanding that severe drought is nothing new to the region.

“Back in the middle ages we had a couple of droughts that lasted for a couple hundred years each in some parts of Southern California,” Lund said. “So I think California has always had droughts and will always have droughts.”

Peri mentioned how in the past 10,000 years, Walker Lake in Northern Nevada has dried up twice. “There’s dead trees at the bottom of it,” he said. “Mother Nature, she goes in her cycles. If we’re in one of those, I would say that it’s going to be very difficult. There’s no question.”

California is the top food producer in the U.S., providing over a third of the country’s vegetables and two-thirds its fruits and nuts, according the the state’s ag department. California’s 76,400 farms and ranches received approximately $54 billion for their output in 2014. Smaller western states like Nevada pull in billions as well. The difficulty from a decades-long drought would be one of the worst kinds – skyrocketing food prices and food shortage.

Yet there is a resilience is the industry, where farmers and ranchers pray for rain, then make adjustments based on what the answer is this year. And even when looking at computer modeling of 100-year droughts, Lund said that though some crops go away, the most profitable crops would remain.