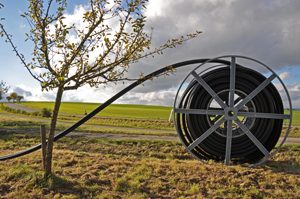 For rural businesses to evolve and be strong in today’s economy, it’s increasingly critical for them to have access to reliable and fast Internet.

Communities that offer top level broadband are positioned to attract companies and provide good jobs for residents. Those that do not will likely be overlooked and left behind. Various leaders and groups are aware of this and focused on improving broadband in rural communities.

It’s a continual chase, as the criteria for how fast Internet should be is ever-growing. A recent op-ed by Wisconsin State Sen. Julie Lassa points out that the “latest 4G data services start at a minimum of 100 MBPS (megabits per second), and the gold standard is ‘gigabit’ service of 1,000 MBPS.”

The senator added that Wisconsin averages about 24 MBPS and called for increased state investment in broadband infrastructure to the tune of $10 million annually. Right now the state’s budget invests $6 million over four years, she wrote.

“The primary, and most obvious, issue in Nevada is both the geography and the topography,” said Connect Nevada Executive Director Lindsey Harmon. “Nevada is a frontier state, so our communities are separated by mass amounts of land that are not necessarily the most favorable terrain for broadband deployment.”

Connect Nevada is affiliated with Connected Nation, a national non-profit that works to expand access to and use of broadband Internet, particularly in underserved areas. It was initially funded early in the Obama Administration through the American Recovery and Reinvestment Act. The funds were used for mapping of “last-mile” access (the connections that go directly into homes and businesses) and developing a statewide broadband plan. The plan includes recommendations on how the state should carry out a broadband strategy. Connect Nevada was later re-contracted by the state to help with broadband improvement, in coordination with the state broadband manager and community stakeholders.

It’s an effort requiring teamwork between leaders, providers and property owners. One recent example occurred in Baker, Nevada, which has a population of 68, but sees a lot of visitors as it is located five miles east of the main entrance to Great Basin National Park. Until recently, there was no mobile wireless access in the area. Connect Nevada facilitated talks between a wireless provider and the community. The negotiations included working with farm owner to allow a slab and tower to be built on his property. Now residents and visitors enjoy mobile wireless in Baker.

“We’re connecting the dots,” Harmon said. “We’re helping that provider find some viable space, and helping the community get in touch with that provider, so it can potentially be brought higher on a priority list.”

The Federal Communications Commission is pushing for these types of efforts across the U.S., encouraging communities to develop “a strategic plan for broadband deployment” that demonstrates to providers that it’s good business to increase high-speed Internet in their areas.

In the Great Lakes region, another group is working to improve broadband and technology use. The Harbor Area Regional Board of Resources, Inc. (HARBOR, Inc.), a citizen based, non-profit, serves the picturesque, resort community of Harbor Springs, Michigan and surrounding townships. It is involved in similar connecting-the-dots work, as well as providing education to businesses and residents on how to best take advantage of the Internet.

“The organization really saw a need to expand broadband and improve technology in general in the area, but part of why we love our area is part of the problem,” said HARBOR, Inc. Executive Director Rachel Smolinski. “We don’t want to step away from that natural beauty, but at the same time we all wanted our wi-fi in our cabin in the woods.”

The group saw a need for broadband expansion as early as 2006, but really became serious about it around 2010 as it combined forces with Connect Michigan, also part of Connected Nation, to develop a strategy.

“The basis of that was bringing together a group of individuals that could actually produce some results,” Smolinski said. “We had community members, governmental entities, service providers in the same room talking.”

The Harbor Springs area needs fiber infrastructure both in the towns and “middle-mile” connections going into the region. Smolinski is working on a partnership between the local school district, county and a provider to build out that infrastructure and hopes to have an announcement later in the year.

It all comes down to a cost-to-benefit ratio. For rural residents and businesses, how much are they willing to pay to have reliable broadband? For providers, is it worth the enormous investment to bring infrastructure to these lower population areas?

“You do have to start working on ways to break down barriers for providers,” Harmon said. Each circumstance is different, she added, and there are various loans and grants available for providers to augment initial investment costs.

Education is also part of the equation. HARBOR, Inc. partnered with a local web marketing firm to provide digital literacy training to community members. The program includes a website, HarborActive.com, with training focused on local business needs. The first course, “Tweet Like a Pro,” was put on last January, and there have been multiple courses on using Facebook.

“We’ve had full classes,” Smolinski said. “We get messages through our Facebook page all the time about whether or not we’re going to offer this course or that.”

Moving forward, communities will continue wrestling with the complex issue of infrastructure. For those wondering what can be done to improve Internet access in their small towns, the blueprint seems to be organizing or joining a group that can identify the obstacles, create a plan and facilitate partnerships. In concert with that, such groups can provide education and training on Internet use.

This proactive approach can help ensure rural communities don’t get left behind.

“Internet is the one thing right now that people just can’t get enough of,” Harmon said. “We haven’t found our max on how much Internet is too much yet.”